“After migrant workers exposed abuses by recruiters in 2009, we won protections for live-in caregivers but other migrant workers were unnecessarily excluded,” explains Liza Draman, spokesperson for the Caregivers Action Centre, member organization of MWAC. “Today after four years of migrant workers speaking out about their experiences, recruitment fees have finally been banned for all migrant workers.”

“Unfortunately over two-thirds of the caregivers we surveyed after the law came into effect in 2009 still paid fees,” adds Draman. “That’s because these protections rely on complaints and not proactive enforcement. For there to be meaningful protections, Ontario must follow provinces like Manitoba and implement employer and recruiter registration, licensing and regulation including joint and several financial liability.”

“I paid $1500 in Honduras to come work here in Canada. Here I worked in an unsafe job at a mushroom farm for a year to be able to pay back that debt,” stated Juan Miguel, a temporary foreign worker leader with Justicia for Migrant Workers, member organization of the MWAC. “On top of that, my employer regularly stole my wages and I couldn’t file a claim with the Ministry or I would have been fired and sent back home. I had to wait until I finished my contract, went home and came back with another employer but by then I had exceeded the current 6 month limit on claims. Today’s changes are an important step, but migrant workers need much stronger protections to ensure we have equal rights on the job.”

“Getting rid of the unfair $10,000 limit for employment standards claims and giving workers 2 years to file claims is a significant victory for Ontario workers, especially migrant workers” says Senthil Thevar, a former migrant worker and a spokesperson of MWAC member organization Workers Action Centre who is owed thousands of dollars in unpaid wages. “If these laws had existed a few years ago, I could have claimed the thousands of dollars of my unpaid wages immediately rather than being forced to go to court.”

“Migrant workers are not inherently vulnerable, its provincial laws that exclude us from basic protections that make us so,” insists Draman. “Many migrant workers are women and racialized people who are being denied immigration status by the Federal Government. Ontario must step up. We are urging Ontario’s government to sit down with migrant workers and update labour laws and other legislation. It is high time that migrant worker achieve the same protections and benefits as other Ontarians.”

Kyla Hernandez, a Filipino migrant worker who paid $5,000 to work in a vegetable packaging company in Windsor, ON, and spoke out against recruitment fees in 2008 adds, “Today’s labour reforms are a result of the advocacy efforts of migrant workers who took to the streets and held politicians accountable for the 19th century working and living conditions that we face in 21st century Ontario. However this victory is bittersweet. Many of our friends who fought for this have been terminated or deported for standing up for their rights. They will not enjoy the fruits of their labour. We owe it to them to continue the struggle and ensure that we are no longer treated as second class citizens.”

Photos from the October 12th Feast for Fairness 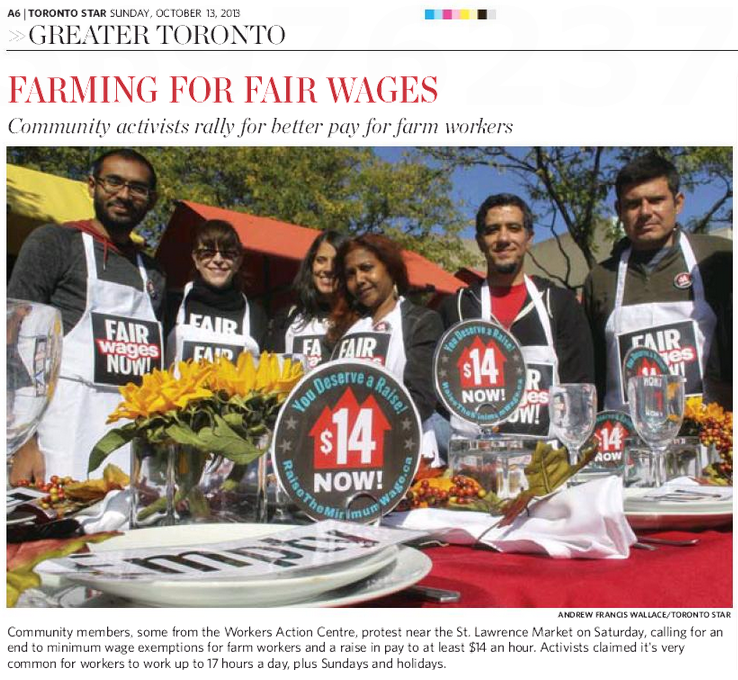 Join us on Saturday October 12th at 1030, as the Campaign to Raise the Minimum Wage, in collaboration with the Migrant Workers Alliance for Change, hosts a Feast for Fairness at Toronto’s St. Lawrence Market (Meet at the corner of Front St. E and Jarvis. (1 block south of King St. E) Toronto), calling for an increase in minimum wage and the inclusion of migrant workers into minimum wage laws.

Look who’s putting food on our table
This Thanksgiving weekend, many low-wage workers are resorting to food banks in order to get by; and restaurant workers continue to see their wages stagnate. Many migrant workers are excluded from minimum wage laws altogether.

Join us as we demand an immediate increase to the minimum wage to $14 and ending minimum wage exemptions for all workers!
END_OF_DOCUMENT_TOKEN_TO_BE_REPLACED 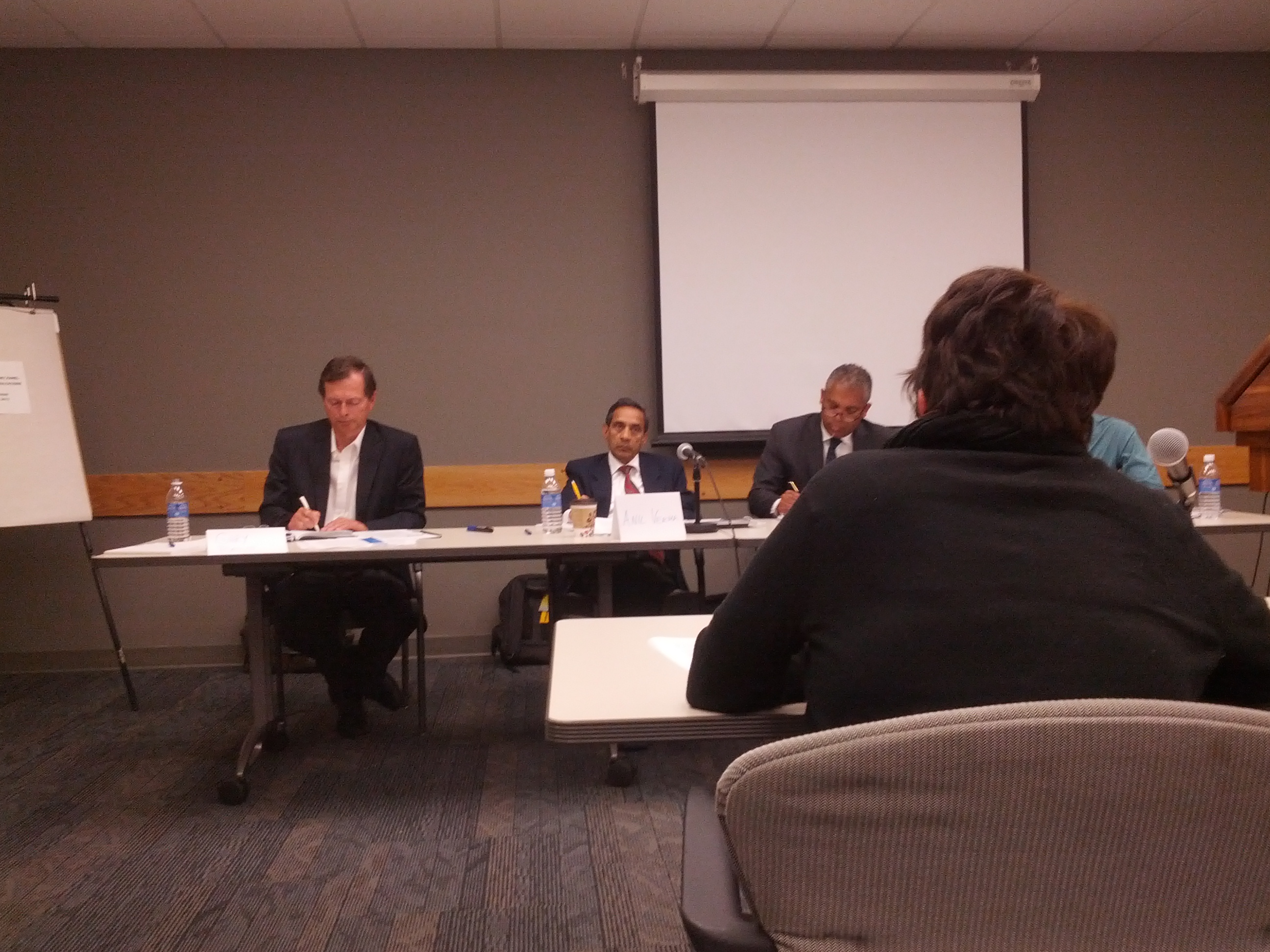 (1) Ontarians in the agriculture industry including those deemed migrant workers are excluded from Ontario’s minimum wage laws. This is fundamentally unfair and unjust. All minimum wage exemptions in the Employment Standards Act must be removed.
(2) Many Ontarians that are denied full immigration status by the federal government face legal obstacles that make it impossible for them to assert their right to minimum wage. In our experience, a great number of workers are being denied minimum wage or overtime pay. Specific anti-reprisal laws must be developed and these legal obstacles removed.
(3) Ontario currently does not track employers and recruiter of Ontarians deemed migrant workers and therefore has little enforcement capacity. All employers and recruiters in Ontario must be registered, must be forced to put up lines of credit, and must be held jointly and severally liable for any violations.

12 recommendations to end migrant and undocumented worker poverty in Ontario.

The Government of Ontario is organizing a consultation on its poverty reduction strategy.Community groups have long demanded good jobs, a liveable income, minimum wage increases, and a raise in social welfare rates to pull Ontarians out of poverty. Communities need and demand decent transit, strong public programs and a commitment to social justice and equity. Many insist that Ontario must invest resources and set targets that reduce poverty for everyone, prioritizing children, families, and communities, not austerity. We at the Migrant Workers Alliance for Change Agree.
But we know that most of the 350,000 Ontarians who are migrant workers and undocumented people don’t get minimum wage, overtime pay, OW, ODSP, social housing, full healthcare or social service programs. Few migrant and undocumented workers can reunite with their families, and those that do are denied the most basic rights and protections. Ontario must do more to end migrant and undocumented workers poverty.

For too long non-status and migrant worker Ontarians have been pushed aside. This time, let’s make it right. Here are 12 easy short-terms steps Ontario could take to address migrant and undocumented worker poverty: END_OF_DOCUMENT_TOKEN_TO_BE_REPLACED
read more →

Everyone agrees: No one should pay to work

The Canada Council for Refugees, Canadian Centre for Policy Alternatives, Metcalf Foundation and even the Law Commission of Ontario agree: Migrant workers need protection from recruiters. Current laws must be expanded and fully implemented.

Only the Ontario Ministry of Labour remains out of step. Not enough has been done to stop recruiter exploitation of migrant workers. We know Minister Yasir Naqvi knows of these demands, the question is when will he act?

END_OF_DOCUMENT_TOKEN_TO_BE_REPLACED

Today’s launch of the LCO commission report highlights the necessity for the government of Ontario to implement proactive steps to protect the over 60,000 temporary foreign workers in Ontario.The report echoes calls from the Migrant Workers Alliance for Change to ban recruitment and placement fees for all temporary foreign workers. The banning of fees is the first step in regulating the run-away recruiter industry that is exploiting thousands of workers in the province. More recommendations from Metcalf Foundation here.

The commission heard first hand from migrant worked who demand an end to recruitment fees and protection from reprisals. It is imperative that the province takes the necessary steps to protect the provinces most vulnerable workers. We owe it to all the migrant workers who build our communities, put food on our tables and take care of our loved ones.

Toronto — Pretend recruiters will be outside Ontario’s Ministry of Labour on Friday (March 22nd) charging employees up to 2 years’ salary or CAD$100,000 to go into their own workplace drawing attention to Ontario labour laws that allow migrant workers to be charged fees to work.

“If recruiters can make a quick buck off migrant workers, we can make a quick buck off the people who allow it,” the organizers of the fee-charging drive said in an email call-out earlier this week.”Recruiters aren’t licensed in Ontario, so anyone can do it! What’s even better is that recruiters can’t be held liable for what happens at work, so if their bosses mistreat them, its no skin off our back.”

“By our guessestimation (its pretty hard to get the facts) at least half off Ontario’s 120,000 migrant workers are paying between $3,000 and $10,000 to recruiters or about two years of their annual salary in their home countries. That could be as high as 600 million dollars a year. Imagine how much more money could be made by the rich if we started charging non-migrant workers too. It‘s an untapped opportunity and we need to take matters in to our own hands,” the email announcement calling for recruiters continued.

The organizers insisted that they weren’t exploiting the Ministry of Labour employees.”With few real ways to get into Canada permanently, migrants are forced to pay recruiters to come to Canada on a temporary basis. To do so, entire families get into debt. Here, they pay in to E.I., and CPP, but face insurmountable barriers into accessing these benefits. Health and safety protections are non-existent. Documents are seized and bosses are often abusive. All of this is allowed by provincial and federal laws. We won’t be treating the Ministry of Labour employees that badly.”