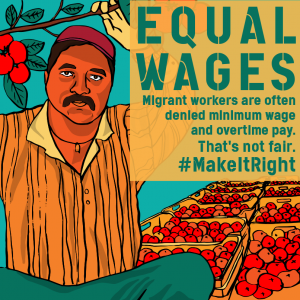 Ontario’s laws exempt farm workers, many of whom are migrant workers, from being paid minimum wage.

Other migrant workers that are supposed to get minimum wage by law can’t because of fear.

Employers are allowed to deduct all kinds of fees from worker’s paycheques, so that at the end of the day workers are making less than the promised wage.

Migrant workers’ immigration status in the country is tied to their employer. Making complaints about unpaid wages or poor working conditions during your contract can get you fired or negatively impact chances of staying in the country.

Under Ontario’s laws workers only have 6 months to file an employment standards complaint when they are owed wages – that means it’s too late to complain after your contract is up.

All workers, including agriculture workers, should be protected equally, and so should their wages and contracts.  All workers should be entitled to minimum wage, overtime and other statutory protections. They should be able to enforce these rights without worrying about missing an unfair 6 month deadline or having to under-claim how much they are actually owed by employers.